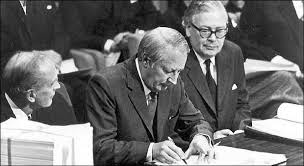 There are those who have immaculate credentials as Brexiteers but who have recently decided to support the disastrous May Withdrawal Agreement (W/A). They nearly all agree that the Agreement is totally unacceptable but say that it does “at least mean we leave” and we can re-negotiate the terms later. International Treaty Law and the Withdrawal Agreement’s horrendous weakening of our economic and negotiating position make such an idea dangerously naive.

As Martin Howe QC has rightly stated this is not like a game of football where we can with a new leader make a strong recovery “in the second half”. Howe rightly says it is like a game of chess where all the key pieces have been lost (in the Withdrawal Agreement) and even the best Brexiteer can no longer win (in the trade negotiations to come).

Equally disastrous is the incorporation of this “deal” into an International Treaty with the EU from which it is virtually impossible to escape. Those who think this view wrong – like Professor Patrick Minford – say that the “letter of the law” will not prevail because “states can always withdraw from treaties”.

But revoking a treaty is not at all easy since most of the grounds for revocation refer to the State in question being “misled” or “corrupted” in some way. We know of course that in this case it is the people of Britain who have been misled by their own State throughout these 46 years of EU treaties and are being misled now by May pretending that this Withdrawal Agreement gets us out of the EU when it does not. Indeed it binds us more strongly, with no votes or power and it does so potentially indefinitely.

The Vienna Convention on Treaties does not care at all whether people and voters of a State have been misled. These treaties are between States and we cannot say that our Government has been misled – they are themselves the misleaders!

Treaties are either signed after a war when one side has been subjugated (that is how Britain got Gibraltar at the Treaty of Utrecht) or when there is simply a mutual desire and respect between two States with no existing bonds or controls or power relationship which disadvantages one party before they even start negotiating a treaty.

This is not the case here. We are not negotiating a treaty as a sovereign power with another sovereign power but as a supplicant prisoner of an empire which has legislated for us, regulated us and taxed us for 46 years to their advantage and whose power the May W/A continues to enforce after we have “left”.

Professor Minford says of the Treaty with the EU which May would sign:

It is not sufficient to say that because it has been signed it is indefinitely binding; this would only be sufficient if there was a supranational power that could enforce this.

But the WA establishes the supranational power – the EU itself – and we are bound by it in so many ways that they could legally attack our interests as soon as we seek fair trade, no freedom of movement, fair mutual tariffs and mutual recognition of standards for instance. EU countries are already threatening we can’t trade with them if we re-claim our fishing grounds!

In other words it is precisely our lack of sovereignty at the start of negotiations which weakens us irredeemably. Only the No Deal WTO option gives us that sovereignty.

In such circumstances we cannot negotiate, as an equal, a totally different economic, legal and constitutional relationship after we have signed an international treaty implementing May’s deal. Professor Minford says the EU State can see its economic interest in renegotiating this deal after we have signed it! But this deal is a comprehensive prison for the UK in which we are prey to every possible blackmail and dirty economic deal or laws directed at our industries, agriculture, finance and fishing.

Indeed in the transition period (which could turn out to be indefinite) the EU can sign us up to trade deals with other countries with tariffs and market access which could disadvantage our industries – and we would have no say in those terms! At the same time they prevent us from concluding our own free trade deals with third countries!

The balance of advantage after 46 years of EU regulatory and legislative power is decisively against us before we even sign a new treaty and the WA binds us possibly indefinitely to it – even threatening to remove N Ireland from our territory. Imagine we agree to WA and seek to overturn its provisions by negotiating a trade agreement with the USA and the Commonwealth. Would those countries be happy to help us break treaty law?

WA also gives the EU at least 2 more years to export more EU citizens to the UK who 1. could become UK citizens and gradually outvote Leavers 2. Give (in the WA) the EU sovereign power by increasing EU case law over these “supercitizens” whose social privileges in the UK are protected whereas UK citizens’ rights will not be!

REVOKING A TREATY UNDER THE VIENNA CONVENTION

I quote here from the Vienna Convention on the Law of Treaties:

Article 45: Loss of a right to invoke a ground for invalidating, terminating, withdrawing from or suspending the operation of a treaty

A State may no longer invoke a ground for invalidating, terminating, withdrawing from or suspending the operation of a treaty under articles 46 to 50 or articles 60 and 62 if, after becoming aware of the facts:

it shall have expressly agreed that the treaty is valid or remains in force or continues in operation, as the case may be; or

(b)(it must by reason of its conduct be considered as having acquiesced in the validity of the treaty or in its maintenance in force or in operation, as the case may be.

(The UK could hardly negotiate over 3 years, pass domestic legislation and sign an International Treaty and claim it was “not aware of the facts”)

Article 50: Corruption of a representative of a State

Article 60 – ONLY a breach by the other party is a reason for termination..

(The EU, given such power over us, will certainly not break the terms of this unequal treaty)

A fundamental change of circumstances which has occurred with regard to those existing at the time of the conclusion of a treaty, and which was not foreseen by the parties, may not be invoked as a ground for terminating or withdrawing from the treaty unless:

the existence of those circumstances constituted an essential basis of the consent of the parties to be bound by the treaty; and

(b) the effect of the change is radically to transform the extent of obligations still to be performed under the treaty.

Finally of course this would be a Treaty which – unlike the Lisbon Treaty’s Article 50 permission to leave the EU – would contain no automatic power for the UK to leave. The EU would itself hold the key to the prison. And International Treaty Law would bind us to the terms we had signed.

Those whom the Gods would destroy they first make mad.

Source: - The May Withdrawal would be a Disaster and could not be Renogotiated