This is a translation of a recent video interview with Evgeny Fyodorov, Deputy of the Duma, and friend of Vladimir Putin, which one of my readers discovered and kindly translated. The video is in the original Russian language with Germans subtitles, and the English translation is added below:

Evgeny Fyodorov, Deputy of the Duma, a friend of Vladimir Putin, and one of the most popular politicians in Russia, speaks about the American occupation of Germany, recorded on August 21st, 2013.

Q:  (statement) The Federal Republic of Germany rejects collaboration in the area of informational exchange with the US and EU states.

What do you think?  Will the FRG be punished by the USA?

A: Uhm, come on…. this is all lies. The FRG’s Intelligence Services have always been directly commanded by the US. We know that from many sources.
The German Military and Intelligence Generals laugh about the statements by Merkel!
Angela (Merkel) makes her patriotic statements, because of the federal elections coming up, because the German people expect that from her.

But the German people can demand whatever they want.  It won’t change the fact, that the German Intelligence Services and Military are only affiliates (of NATO etc) of the CIA and of the US Defense Ministry and nothing more.

This is the reason why German Intelligence and Military take shots at Merkel and her statements, since their positions and careers don’t depend on her, but rather, on the USA.

The German Generals and Intelligence chiefs are carefully selected and controlled, and their position depend on the Americans, and not on the Chancellor, nor on the German government. 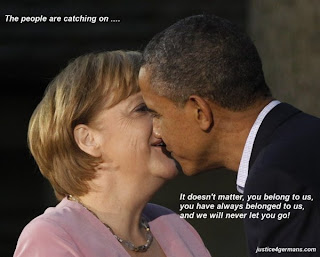 Germany is just another US colony, like many other countries too.
By the way, there is a national liberation movement in Germany, like we have in Russia too.

And this German national liberation movement tries to publicly talk about these topics, such as German gold reserves stored abroad, the question of the sovereignty of the German people, and the rights of the self-contained administration of the German territory, and they are demanding the withdrawal of US occupation troops from Germany.

In contrast to Russia, Germany however,  is directly occupied by US troops, who are stationed there.

Do you seriously think, that this has changed even the slightest bit in respect to Germany’s US occupation?

This is just ridiculous! The people who believe it are so naive!

Q  (Statement)  It is claimed, however, that Germany is a member of NATO and so,  for that reason, the US and British troops are stationed in Germany.

A: Of course they say that!  That is the task of US propaganda … to “sugar coat” the American occupation, and to display it to the Germans as a “nice” and “cozy” relationship.

But in reality, simple US occupation is behind it. And within NATO, Germany is treated as another US vassal state and is exploited.

There is a “master” in Washington, and there is the servant who was commanded by the master to become a NATO member!

And just like we see in the case of Mr. Snowden, Germany is a vassal state of the USA, and so all other statements by Merkel are a fiction … a lie!