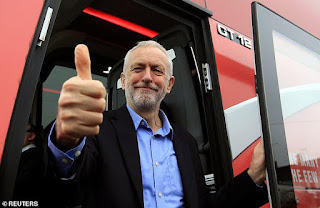 Amid all the eye-catching largesse of Labour’s manifesto — free broadband for all, the council house-building programme, and renationalisations — its radical proposals on abortion seem to have slipped through unnoticed.

However, it is vital we examine the party’s declaration that ‘we will uphold women’s reproductive rights and decriminalise abortions’. Decriminalising abortion would mean you could have one for any reason; you wouldn’t even be asked why you wanted it.

Right To Life campaigners say the plan has the potential to allow unlimited abortions right up to birth, well beyond the present 24-week limit, which is already around twice the average time limit on abortions in Europe.

Labour says there would be ‘wide public consultation on the detail of new laws and regulations’. Legislatively, it would mean scrapping the existing 1967 Abortion Act, which says you have to give a reason for an abortion and that two doctors have to sign it off.

It would involve repealing the relevant sections of the 1861 Offences Against The Person Act, which currently bans abortion. (The 1967 Abortion Act was brought in to allow wide-ranging exceptions, which is why it would become redundant.)

They could mean that abortion happens without constraints. If you don’t have to get the procedure signed off by two doctors independently, you could even choose to have one because you did not like the sex of the baby.

How deeply ironic that the party that makes a big deal about being pro-women would make it possible to abort girl foetuses on the basis of gender.

I do realise that, by comparison with Brexit, the economy, jobs and policing, decriminalising abortions may not be first among voters’ concerns. Fair enough.

But the character of a party can be determined by just these sorts of issues, which aren’t mainstream, but still matter.

Abortion is, whatever your view, a desperately serious moral question. It is, quite literally, a matter of life and death. And many people who, for pragmatic reasons, are pro-choice and think it best that abortion be legal in order to be safe will draw the line at what is tantamount to infanticide: late abortions up to birth.

Labour says there would be ‘wide public consultation on the detail of new laws and regulations’. Legislatively, it would mean scrapping the existing 1967 Abortion Act, which says you have to give a reason for an abortion and that two doctors have to sign it off, writes MELANIE MCDONAGH

I accept that the present abortion law doesn’t count for very much. That’s why there are more than 200,000 a year, most relatively early in pregnancy.

I can’t think of anyone who has ever been turned down for an abortion, even though they don’t come anywhere near qualifying for one under the existing legal criterion that continuing with the pregnancy would involve a serious risk to physical or mental health.

Two years ago, a Daily Mail investigation revealed that Marie Stopes, which has 60 clinics across England, signed off abortions for women they had never even met.

Undercover reporters were approved for abortions based on a brief phone conversation with a call centre worker and told there was no need to meet a doctor because they filled out the necessary forms ‘behind the scenes’, based on reasons given to staff over the phone. The discussions could be as short as 22 seconds.

At the time, Marie Stopes said: ‘We would like to reassure women our services comply fully with UK abortion law.’

If the proposal does mean doing away with the upper time limit, that would mean aborting foetuses at the same age as much-wanted premature babies, which we go out of our way, quite rightly, to keep alive. We can keep a baby alive at 23 weeks, which is already less than the existing limit. It is abhorrent to be countenancing increasing the limit — we should surely be thinking of decreasing it.

There is a real danger that Labour’s plans would make Britain’s abortion law one of the most radical in the world.

More fundamentally, making abortion easier risks treating it as if it’s just another form of birth control — no more problematic than contraception — which means that we wouldn’t any longer acknowledge that it’s morally on a different level. To my mind, abortion means taking away a life.

And that’s where the British Medical Association seems morally astigmatic in backing the move. It has argued that ‘abortion law is out of step with the emphasis on patient autonomy found elsewhere in medicine’.

Likewise, Labour MP Stella Creasy, who has long campaigned for decriminalisation, remarks: ‘At the heart of this is: do we want women to have the same equal rights over their bodies that men have?’

Except that it’s not just about autonomy, and equal rights with men, is it? There are two lives here: abortion isn’t like having your tonsils out. It’s not just another medical procedure.

It is this insistence on choice and equality that seems to override every other concern. Labour and the medical establishment may claim the procedures will be regulated and ethical, but the pressure from pro-choicers is to make them increasingly accessible to more and more women.

Abortion is a sensitive, highly charged issue, which divides people of all parties.

This move by Labour to decriminalise the procedure takes us into a very dark place where the humanity of the foetus isn’t acknowledged and prenatal human rights count for nothing. It’s also at odds with developments in neonatal care that make it possible to keep premature babies alive at younger ages.

And it is not supported by most women: a poll by Survation in 2017 suggested that 70 per cent of women favoured reducing the time limit on abortion; only 1 per cent were in favour of extending it.

That’s the rational approach, not this extremist, dogmatic policy. For me, it’s a reason not to vote Labour.