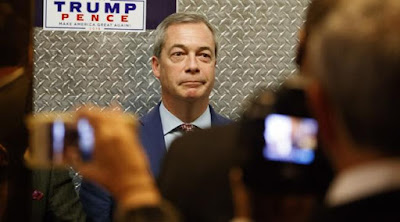 Trump’s victory was predictable, and was predicted, but not by looking at polls. Polling has taken a beating recently having failed to predict the victory of David Cameron’s Conservative Party in the British general elections, then Brexit, and now the election of Donald Trump. One can argue about what’s wrong with the methods involved, but more fundamentally what polls do is to treat these phenomena as isolated events when they are in fact the product of a common set of causes 30 years in the making.

There are two issues at play here. The first is known as Galton’s problem, after Sir Francis Galton, the inventor of much of modern statistics. Galton’s problem is that when we treat cases as independent—the British election, Brexit, the U.S. election—they may not actually be independent. There may be links between the cases—think of Brexit’s Nigel Farage showing up at Trump's rallies—and there could be subtler contagion or mimicry effects in play as information from one case “infects” the other, changing the dynamics of the system as a whole. Could there then be a higher set of drivers in the global economy pushing the world in a direction where Trump is really just one part of a more global pattern of events?

Consider that there are many Trumpets blowing around the developed world, on both the right and the left. On the one side, insurgent right-wing parties are bulldozing the vote shares of traditional centrist parties all over Europe. For example, the Finns Party is the second-largest party in the Finnish parliament. In Sweden, the Swedish Democrats are the third-largest party in parliament. In Hungary, Prime Minister Viktor Orban’s political party, Fidesz, runs the country having won two elections. Meanwhile in France, the most popular political party is the National Front, which in all scenarios but one—whatever such exercises are actually worth—is expected to win the first round of voting in the 2017 French presidential election. But when all the other parties in France close ranks to prevent the National Front from winning the second round, it’s hardly a victory for democracy. And even in that bulwark of stability, Germany, the upstart Alternative for Germany beat German Chancellor Angela Merkel’s Christian Democratic Union into second place in her own backyard. 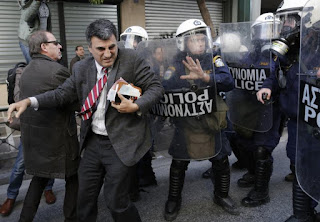 A clash outside the Labor Ministry in Athens, Greece, January 2013.

But there is also a left-wing version of this phenomenon. Consider the Scottish National Party (the clue is in the name), which has annihilated every other political party in Scotland, or Podemos in Spain, which has won 69 out of 350 seats in the Spanish parliament. Left-wing upstart Syriza runs Greece—even if it’s under Troika tutelage—and Die Linke in Germany is yet another drain on the vote share of the once-dominant Social Democrats, whose own vote share has utterly collapsed.

These parties of course have very different policy stances. The new right favors nationals over immigrants and has, at best, a rather casual relationship with the liberal understanding of human rights. The new left, in contrast, favors redistribution from top to bottom and inclusive rather than exclusionary growth policies. But they also have more in common than we think. They are all pro-welfare (for some people, at least), anti-globalization, and most interestingly, pro-state, and although they say it sotto voce on the right, anti-finance. To see why, consider our second issue.
At the end of World War II, the United States and its allies decided that sustained mass unemployment was an existential threat to capitalism and had to be avoided at all costs. In response, governments everywhere targeted full employment as the master policy variable—trying to get to, and sustain, an unemployment rate of roughly four percent. The problem with doing so, over time, is that targeting any variable long enough undermines the value of the variable itself—a phenomenon known as Goodhart’s law.

Long before Goodhart, an economist named Michal Kalecki had already worked this out. Back in 1943, he argued that once you target and sustain full employment over time, it basically becomes costless for labor to move from job to job. Wages in such a world will have to continually rise to hold onto labor, and the only way business can accommodate that is to push up prices. This mechanism, cost-push inflation, where wages and prices chase each other up, emerged in the 1970s and coincided with the end of the Bretton Woods regime and the subsequent oil shocks to produce high inflation in the rich countries of the West in the 1970s. In short, the system undermined itself, as both Goodhart and Kalecki predicted. As countries tried harder and harder to target full employment, the more inflation shot up while profits fell. The 1970s became a kind of “debtor’s paradise.” As inflation rose, debts fell in real terms, and labor’s share of national income rose to an all-time high, while corporate profits remained low and were pummeled by inflation. Unions were powerful and inequality plummeted.
The era of neoliberalism is over. The era of neonationalism has just begun.

But if it was a great time to be a debtor, it was a lousy time to be a creditor. Inflation acts as a tax on the returns on investment and lending. Unsurprisingly in response, employers and creditors mobilized and funded a market-friendly revolution where the goal of full employment was jettisoned for a new target—price stability, aka inflation—to restore the value of debt and discipline labor through unemployment. And it worked. The new order was called neoliberalism.

Over the next thirty years the world was transformed from a debtor’s paradise into a creditor’s paradise where capital’s share of national income rose to an all-time high as labor’s share fell as wages stagnated. Productivity rose, but the returns all went to capital. Unions were crushed while labor’s ability to push up wages collapsed due to the twin shocks of restrictive legislation and the globalization of production. Parliaments in turn were reduced to tweet-generating talking shops as central banks and policy technocrats wrested control of the economy away from those elected to govern.
But Goodhart’s law never went away. Just as targeting full employment undermined itself, so did making inflation the policy target.

Consider that since the 2008 crisis the world’s major central banks have dumped at least $12 trillion dollars into the global economy and there is barely any inflation anywhere. Almost a quarter of all European bonds now have negative yields. Unsurprisingly, interest rates are on the floor, and if it were not for the massive purchasing of assets in the Eurozone by the European Central Bank, deflation would be systemic. In sum, we may have created a world in which deflation, not inflation, is the new normal, and that has serious political consequences, which brings us back to Trump. 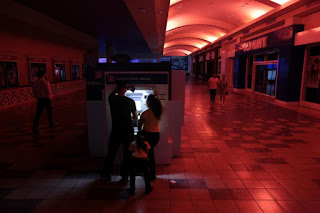 Using an ATM during a power outage in San Juan, Puerto Rico, September 2016.

In a world of disinflation, credit became very cheap and the private sector levered up—massively—with post-crisis household debt now standing at $12.25 trillion in the United States. This is a common story. Wage earners now have too much debt in an environment where wages cannot rise fast enough to reduce those debts. Meanwhile, in a deflation, the opposite of what happens in an inflation occurs. The value of debt increases while the ability to pay off those debts decreases.

Seen this way, what we see is a reversal of power between creditors and debtors as the anti-inflationary regime of the past 30 years undermines itself—what we might call “Goodhart’s revenge.” In this world, yields compress and creditors fret about their earnings, demanding repayment of debt at all costs. Macro-economically, this makes the situation worse: the debtors can’t pay—but politically, and this is crucial—it empowers debtors since they can’t pay, won’t pay, and still have the right to vote.

The traditional parties of the center-left and center-right, the builders of this anti-inflationary order, get clobbered in such a world, since they are correctly identified by these debtors as the political backers of those demanding repayment in an already unequal system, and all from those with the least assets. This produces anti-creditor, pro-debtor coalitions-in-waiting that are ripe for the picking by insurgents of the left and the right, which is exactly what has happened.

In short, to understand the election of Donald Trump we need to listen to the trumpets blowing everywhere in the highly indebted developed countries and the people who vote for them.

The global revolt against elites is not just driven by revulsion and loss and racism. It’s also driven by the global economy itself. This is a global phenomenon that marks one thing above all. The era of neoliberalism is over. The era of neonationalism has just begun.