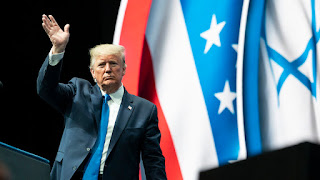 The order mandates the inclusion of Jewish college students among groups protected from discrimination under Title VI of the Civil Rights Act. Some Jewish community leaders said it was a bold step in fighting anti-Semitism, while others viewed it as a cynical ploy that could backfire.

Until now, Title VI has addressed discrimination based on race, ethnicity and country of origin, but not religion. A day before the signing, the New York Times and other outlets reported that the executive order would redefine Judaism as a nationality, which ostensibly would protect Jewish students under Title VI.

Those reports were inaccurate, but spread across the internet and opinion pages. Once the signed order was released, it showed that the main change was defining anti-Semitism as discrimination under the Title VI umbrella. It uses language from the International Holocaust Remembrance Alliance, whose definition of anti-Semitism includes denying Jews the right to self-determination, claiming the State of Israel is “a racist endeavor” and “drawing comparisons with contemporary Israeli policy to that of the Nazis.”

Some focused on the rise in anti-Semitic speech and hate crimes on American campuses, lauding the president’s initiative for attempting to stem that tide. Others, even as they welcomed the added protection for Jewish students, expressed concerns about the possible suppression of free speech on campus. Still others criticized the timing of the executive order, coming on the same day as the White House Hanukkah parties, and criticized Trump for ignoring the very real anti-Semitism of the extreme right.

Here is a sampling of Jewish reaction:

The Conference of Presidents of Major American Jewish Organizations came out solidly in favor of the initiative:

“We welcome the historic executive order… With a dramatic rise in antisemitism at home and abroad in recent years, particularly on college campuses, the Jewish community has persistently advocated for the protections this measure provides against Jew-hatred. Jewish students are now included in the groups protected under Title VI of the Civil Rights Act of 1964, meaning US institutions of higher education risk federal funding if they fail to act against antisemitic discrimination on their campuses. We hope this will abate the increasingly virulent Jew-hatred on display at some colleges and universities across the country.

The Republican Jewish Council called the signing “a truly historic and important moment for Jewish Americans. President Trump has extended to Jewish students very strong, meaningful legal protection from anti-Semitic discrimination. Sadly, every day, Jewish students on college campuses face outrageous attacks on their Jewish identity and beliefs. The rapid increase in such incidents in recent years is of great concern.”

The American Jewish Committee also welcomed the executive order, writing in a statement, “To date, responses to antisemitism on many campuses have often fallen short, leaving Jewish students vulnerable. Existing federal policy has not been fully enforced and today’s order merely gives Jews what other groups have long enjoyed—the right not to be subject to a hostile environment on campus. There is nothing inconsistent with protecting freedom of expression and providing Jews the same protections accorded other minorities.”

The group added a cautionary tone, however: “AJC does not consider the EO, or longstanding Department of Education guidance, to be designed to suppress rational criticism of Israel or its policies, and we will speak out against any attempt to do so. AJC also recognizes that there will be hard cases where it will be necessary to decide whether the speech in question is constitutionally protected or not.”

J Street president Jeremy Ben-Ami led the opposition: “This executive order, like the stalled congressional legislation it is based on, appears designed less to combat anti-Semitism than to have a chilling effect on free speech and to crack down on campus critics of Israel. We feel it is misguided and harmful for the White House to unilaterally declare a broad range of nonviolent campus criticism of Israel to be anti-Semitic, especially at a time when the prime driver of anti-Semitism in this country is the xenophobic, white nationalist far-right.

“Kenneth S. Stern, the expert who drafted the definition of anti-Semitism adopted by this executive order, has publicly opposed its application to college campuses. In opposing the legislation that forms the basis for this executive order, Stern wrote in the New York Times that ‘If this bill becomes law…students and faculty members will be scared into silence, and administrators will err on the side of suppressing or censuring speech.’”

The Jewish Democratic Council of America also focused on the danger to free speech represented by the executive order, but had harsher words for Trump himself: “The day after yet another attack on Jewish Americans, and just days after President Trump characterized Jews as money-hungry ‘killers,’ President Trump has zero credibility to take meaningful action to combat the scourge of anti-Semitism for which he is partially responsible.

“If President Trump truly wanted to combat anti-Semitism, he would accept responsibility for his role in perpetuating anti-Semitic stereotypes and conspiracy theories, and emboldening white nationalism. … we’d prefer Trump stop inciting the flames of hatred against Jews as opposed to feigning his concern with a political stunt timed to correspond with the White House Hanukkah party.”

Comment: It's never enough for some of these groups, but looks like 'holocaust denial' legislation will be next. If Trump has not managed to start a war in the meantime - Ed