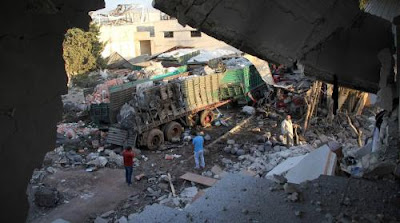 An attack on a UN humanitarian convoy exactly at the time of the UN summit. A conveniently timed distraction quickly blamed on Assad and Russia.

Over the weekend the US (and its “coalition puppets partners”) were caught red handed providing air support to ISIS fighters in Syria, helping the terrorists overrun a strategic air force base in Deir Ezzor.
This was an obvious attack on a sovereign nation, in support of a radical terrorist group. The US called it a “mistake”, but we know it was no mistake. It was a message to Syria, Russia and Iran.
The US will not tolerate seeing Assad and the Syrian government forces win the war on the ground. America’s policy on Syria is crystal clear…ISIS will raise its black flag over Damascus. Assad must go.

Russia called out the US on the attack in Deir Ezzor, and revealed that America is providing air support to ISIS fighters.

Russia and Syria were quickly blamed, no evidence and proof was provided.

Now we have video evidence from the Russian Defense Ministry, showing that their was no chance it had attacked the convoy, leaving the only option as to who actually attacked the UN convoy in Aleppo squarely on “moderate” rebels’ shoulders…who are connected to the US coalition.
A false flag distraction. No doubt about it.

The Russian military released drone footage of a pickup truck carrying a heavy mortar and driving past the humanitarian convoy.

“No airstrikes were carried out against a humanitarian aid convoy in a southwestern suburb of Aleppo by Russian or Syrian aviation. Seeing as the convoy’s route lied through the territories controlled by militants, the Russian reconciliation center monitored its passage yesterday via drones.”

Konashenkov added that monitoring finished when all humanitarian aid was delivered at 10:40 GMT.
“Further movements of the convoy were not monitored by the Russian side. Only the militants controlling this area know details of the convoy’s location.”

Examination of video shows no signs of an ammunition strikes on the convoy.
“We have carefully studied videos by so-called activists from the site and found no signs of any ammunition striking the convoy. There are no shell holes, cars’ bodies are not damaged and there are no construction faults from the bust wave. All shown on the footage is a direct consequence of the cargo being set on fire. The fire strangely coincided with a major offensive by militants in Aleppo.”

Zerohedge provides this logic to the narrative…

The [Russian] ministry emphasized that the perpetrator of the fire, as well as his goal may be known by members of the “White Helmets” organization that has connection to al-Nusra Front terrorists who have “accidentally” been at the right time and in the right place with cameras.

While it is unclear why Russia would bomb a convoy it was filming and which it knew the entire world would be focused on, at least it has provided some footage to validate its statement. We now eagerly await the US “intelligence services” to present their own evidence which confirms that Russia is lying. We doubt that will be provided, and instead this will devolve into yet another instance of fingerpointing and accusatory diplomacy which will achieve nothing but escalate already deadly tensions in the region.

The big geopolitical news in the aftermath of yesterday’s bombing of a UN humanitarian convoy in Syria, which according to unofficial, UK-funded “Syrian Observatory for Human Rights” was done by Russian or Syrian fighter jets, was this morning’s vocal denial by the Russia defense ministry that neither Russian nor Syrian planes were responsible for the bombing raid.

As we concluded this morning, there were two possibilities: either Russia is lying, or it is telling the truth. And since Russia should be able to back up its claims with video footage, the question emerges: did US-coalition forces or US-backed “moderate rebels” belonging to the al-Nusra, stage the attack a UN convoy in the latest “false flag” attempt to shift attention to “Russian aggression”, and seek justification to escalate the military campaign against Syria, and its proxy supporter, Russia?

To be sure, it won’t be the first time the US has “made a mistake” – just on Saturday, US-coalition forces apologized for killing dozens of Syrian troops in what Assad called “flagrant American aggression.” If confirmed, it will once again demonstrate that the western MIC will stop at nothing to escalate military conflicts, no matter the bodybount, if it means bigger military contracts courtesy of generous US taxpayers.

And since ignoring Russia’s response would mean the US was tacitly admitting was the responsible party (and lied), moments ago the WSJ reported that U.S. intelligence agencies said they believe that Russian aircraft conducted the strike that targeted a humanitarian aid convoy in northern Syria on Monday, essentially accusing the Kremlin of lying.

John Kerry initially had suggested that Syrian aircraft were responsible for the strikes on the U.N. convoy, which killed at least 12 people. However, the rhetoric escalated after U.S. officials said new intelligence indicates that Russian forces, rather than the Syrians, conducted the strike.

The WSJ also said that US officials said the Russian and Syrian governments had been notified in advance to the presence of the 31-truck convoy to ensure it wouldn’t be bombed by their forces in the area. “There was coordination ahead of time with the Russians,” a U.S. official said. Oddly, the US had not notified the Russian and Syrian governments on Saturday when a US strike killed over 60 Syrian troops in what the US later said was a “mistaken” strike.

The White House declined to comment on the new intelligence....

From :
http://www.zerohedge.com/news/2016-09-20/us-accuses-kremlin-lying-says-russia-bombed-syrian-aid-convoy
Posted by HRP at 09:31 No comments: