German historians on Wednesday accused far-right leader Alexander Gauland of paraphrasing Adolf Hitler in a newspaper column taking aim at a "globalised class" that he claimed threatens all that is good in his "homeland". 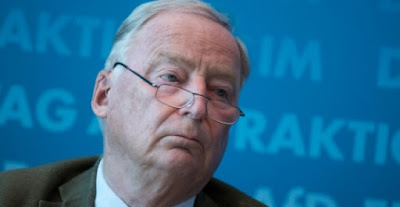 The co-leader of the far-right AfD rejected allegations of parallels with a 1933 speech by Hitler, but the latest episode is yet another controversy raising questions over his anti-migrant party's views on the Nazi-era.

In a guest commentary for Saturday's Frankfurter Allgemeine Zeitung (FAZ), Gauland wrote that the "globalised class" occupies positions in mainstream organisations from international corporations to the media to universities, and are also in key political parties.echoing

"Their members live almost exclusively in big cities, speak fluent English, and when they move from Berlin to London or Singapore for jobs, they find similar apartments, houses, restaurants, shops and private schools everywhere.

"This group socialises among itself but is culturally 'diverse'," he wrote, adding that they have no attachments to their homeland.

He argued that the AfD stands against this group which if left unchecked, would threaten "what makes our country and our continent worth living in".

Historian Wolfgang Benz, a prominent researcher on the Nazi era, noted however that Gauland's commentary was strikingly similar to a speech made by Hitler in 1933.

"It's a paraphrase that looks like the AfD chief had the Fuehrer's speech from 1933 on his desk when he was writing his column for the FAZ," wrote Benz in Tagesspiegel daily.

Addressing workers at the Siemens Dynamo Works in Berlin in November 1933, Hitler railed against a "small, rootless, international clique".

They are "the people who are at home both nowhere and everywhere, who do not have anywhere a soil on which they have grown up, but who live in Berlin today, in Brussels tomorrow, Paris the day after that, and then again in Prague or Vienna or London, and who feel at home everywhere," he said, as a man in the audience shouts "the Jews!".

In the speech -- also the first by Hitler broadcast live on all German radio stations, the Nazi leader accused this "clique" of its ability to "conduct their business everywhere but the people cannot follow them".

Historian Michael Wolffsohn said it was no accident Gauland had written his column in this manner.

"It is bad that Gauland is signalling to his educated followers that he knows the speech and style of Hitler's speech and that he is transferring Hitler's accusations against the Jews to the opponents of the AfD today," said Wolffsohn.

Leading members of the AfD have come under fire repeatedly for comments that appear to play down the Holocaust.

Gauland in June described the Nazi period as a mere "speck of bird poo in over 1,000 years of successful German history".