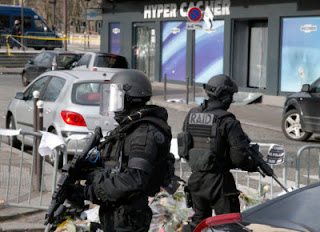 As a dedicated security professional I spend much of my time studying social, political and economic developments in our landscape and how these changes may impact the current, and more importantly, future security trends. Three articles have caught my eye in recent months. The first article was regarding the Swedish Police struggling with 52 blacklist no go zones, where parallel societies exist outside of police control. The second article talked about the French Army’s contingency plans for ‘re-appropriating national territory’, meaning to win back neighbourhoods where the population has become hostile to security forces and has easy access to weapons. The third article concerned Sweden’s army chief warning men under his command in an internal document, that they could expect to be fighting a war in Europe against skilled opponents “within a few years”.

These articles would be unheard of and seen as alarmist or even absurd only a few years ago. So what is the current situation in Europe that has led to parallel societies, the need for military plans to be drawn up to regain national territory and a senior military commander warning of a possible third world war?

The terrorist attacks against Charlie Hebdo, Stade de France, Bataclan Theatre and Brussel’s Airport have shown how significant the threat is that Europe currently faces from Islamic terrorism. These attacks have made apparent to the general public, how overstretched the European security services are and impacting their confidence on the state’s ability to protect them. The Brussels attacks in particular shone a spotlight on Molenbeek, Europe’s so-called ‘jihadi central’. This no go zone of Brussels has become a breeding ground for extremism because of ineffectual state policing, leading to limited oversight, allowing criminality to prevail and radical Islamists to obtain a foothold. The key point though is that Molenbeek is not a one off in Europe.

In Sweden, the National Criminal Investigation Service highlighted 52 areas which have been put on a '"blacklist" which are then divided into three categories from "risk areas" to "seriously vulnerable". An example of one of these areas is Rinkeby in Stockholm, which the report describes as an area where police are attacked, there is open support for religious extremists and people of Jewish faith should avoid the area. In Ronna, Geneta and Lina, areas of southwest Stockholm, criminals eat at restaurants without paying, drive their cars at high speeds and park wherever they like without legal retribution. They also sell guns and drugs and intimidate locals and police. In Norsbord, criminals have been reported to let children as young as 12 carry weapons and they have an undue influence on local politics. These are just a few examples of no go zones in Europe at present, prior to the current wave of mass migration.

Conflict, poverty and population pressures in Africa and the Middle East are causing mass migration to Europe, at such a rate that the host nations are finding it impossible to effectively police, never mind assimilate the new arrivals. These migrants often lack the skills and abilities for the high tech job market of Europe, leading to unemployment, social deprivation and in many cases criminality. Another barrier to employment is the lack of language skills, with the welfare state enabling the formation of ghettos because migrants can live on state handouts with integrating. Without effective integration, the problems which I have highlighted in Molenbeek and Stockholm will become commonplace across Europe.

Migrants to Europe are also bringing with them their grudges and many of these issues are playing out in tit for tat attacks. In mid-February a Kurdish man was shot while attending a pro-Kurdish rally in Stockholm. A couple of days later a Turkish cultural centre in Stockholm was bombed. Many migrants that have come to Europe from Syria have fought for different factions and it seems likely that we will witness violence among these communities. An interesting Twitter profile to look at is @EU_Interpol. They are not actually associated officially with Interpol, however, they use open source intelligence methods to highlight Syrian militants now living in Europe, which brings me onto the topic of training and experience.

Europol warned in January that Islamic State has set up training camps across Europe to prepare fighters to carry out ‘special forces style’ attacks in EU countries. The key point regarding this topic is that with the Iraq, Syrian and Libyan conflicts particularly, there are significant quantities of military aged males who have battle experience, training in weaponry, tactics and explosives, who are now living in Europe.

Although the majority of our reporting focuses on emerging markets and supporting client’s operations in these areas, Europe’s deteriorating security situation is taking up more of our time. A large proportion of that reporting involves crimes committed by migrants, either against Europeans or other migrants. Some examples of the types of criminality we are monitoring include, rape and sexual violence, murder, smuggling, weapons sales, terrorism, rioting, fraud, arson, drug dealing and paedophilia.

Another destabilising factor that is currently playing out in Europe are the reports of undue influence on the political system. The mayor of Tower Hamlets, a district in London, was removed in 2015 for vote rigging and voter intimidation. Lutfur Rahman was Britain’s first Muslim executive mayor and was accused of spiritual intimidation of voters, urging them “to retain truth, righteousness and practise religious belief” by voting for him. In Norsborg, Stockholm, police report that criminal gangs in the area have an undue influence on local politics. A group of criminals from Södertälje and Norsborg have formed a movement called the Assyrian National Party. Police currently have very limited oversight of the group and are unware if they are a political party or a tool for recruitment for the conflicts in Iraq and Syria. The key issue here is that as Europe becomes more socially diverse, fragmented and polarised, so will its politics, making the continent difficult to govern due to a disparate set of parties, with differing ideological beliefs and objectives for society.

The cementing of the right

Terrorist attacks and migrant criminality is polarising European opinion on mass migration. On 27th March 2016, at a memorial for those who were killed in the Brussels terror attacks, a group of 500 people, some of which were reportedly from the right wing group ‘The Nation’ protested against terrorism and immigration. From Corsica in the south to Sweden in the north we are seeing attacks on migrant centres and mosques and the rise of nationalist ‘self-defence’ and protest groups, such as PEGIDA and the Soldiers of Odin. In eastern Europe, The People’s Party – Our Slovakia, a far-right group who wear uniforms modelled on a second world war Nazi puppet state, won seats in parliament for the first time and right wing parties are on the rise across the continent.

The destruction of community cohesion, a tactic of Islamic State

Islamic State are using a tactic in Europe that they have used in Iraq for years. By attacking one community they erode cohesion with the intention of creating a sectarian war. If Muslims feel that far right groups are going to attack them, they may seek out help and support from the more radical elements of society, which only serves to add fuel to the problem. European fear of radical Islam will increase prejudice, discrimination, ghettoization and unemployment, which will only serve to radicalise more Muslims. As more attacks are conducted, far right groups will also gain in support leading to a highly polarised society with the right wing one end of the spectrum and the left and Islam on the other end.

With mass migration, criminality, terrorism and the rise of far right political parties and self-defence groups, Europe is currently on a path to political, economic and civil turmoil.
Security services are currently overstretched in some countries and the sudden influx of millions of migrants, associated language difficulties and cross border investigations will only make the problem more acute. Add to this the potential for right and left wing terrorism, which cannot be discounted and seems likely in the medium term, suddenly intelligence and police institutions will be completely overwhelmed.

There is also the issue of a clash of civilisations. Many of Europe’s new arrivals have been raised in another religion and represent a radically different culture, with different beliefs and values. Two cultures living side by side peacefully is difficult, just take Northern Ireland as an example. That is a country where the people are of the same race and speak the same language. What will happen when there are suddenly numerous religions and ethnicities living side by side? In Malmo for example certain migrant communities are currently engaged in a race war.

Europe is heading for a clash of civilisations and any reaction by political groups to enforce European cultural dominance will be seen as discrimination, leading to further divisions and eventually if the political process cannot solve these issues, conflict and warfare.

The process I have outlined will take place over a matter of years and decades, however, with the European economy still precariously unstable, should an economic deterioration occur this process will be significantly quickened. People who support the Soldiers of Odin, Britain First or the English Defence League represent a section of society who have little to lose, which is why they are the first to protest. The middle classes will only come out to protest when they are being significantly impacted by a situation, so if millions across Europe suddenly lose their jobs and houses, there is nothing to hold them back from venting that anger. In that situation, I would agree with the head of Sweden’s armed forces that we would witness another world war in Europe.

http://www.counterterrorbusiness.com/company-focus/europe%E2%80%99s-descent-chaos
Posted by HRP at 12:48