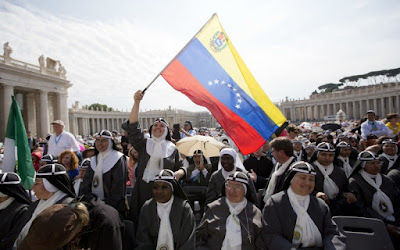 Pope Francis proclaimed two new saints on Sunday: a Lutheran convert who hid Jews during the Second World War and the Polish founder of the first men’s religious order dedicated to the immaculate conception.

Hesselblad saved the lives of 12 Jewish members of the Piperno-Sed families by hiding them in the convent in Rome where she was superior from December 1943 until the capital’s liberation on June 4, 1944.

Israel’s Holocaust centre Yad Vashem bestowed on her the title “Righteous Among the Nations.” It said Hesselblad never tried to convert those she saved but instead insisted “that they say their Hebrew prayers and fulfil other obligations of their religion.”

Hesselblad, who was baptised in the Reform Church, migrated to the United States where she worked as a nurse and converted to Catholicism. She later moved to Rome, where she became a nun and dedicated her life to her religious order. She died of natural causes in 1957 and was beatified in 2000.

She is Sweden’s second saint in 625 years, following St Bridget, who was canonised in 1391.

Her canonisation comes ahead of Francis’s scheduled trip to Sweden later this year to mark the 500th anniversary of the start of the Protestant Reformation.

Stanislaus of Jesus and Mary, as he is known, supported hospitals and shelters for the poor and cared for the sick in 17th-century Poland. In his early years he himself experienced serious sickness and begged in the streets.

“Papczynski preached mercy and encouraged people to do acts of mercy,” the Polish episcopate said on its website.

His crowning achievement was founding the order of Marian Fathers, which preached the cult of Holy Mary.

Papczynski was born in 1631 to the family of an ironsmith in the village of Podegrodzie, in southern Poland. He had one brother and six sisters, and died in 1701.

Ed-' Pope' JPII has already been canonised , but 'Popes' John XXIII and Paul VI are also in the process of being canonised. All the Vatican II Popes are being legitimised, which is an inversion of the Traditional Church. The Jews have been told that the Old Covenant is fine for them. This confirms that the new new overarching faith is really  'Holocaustianity'
Posted by HRP at 03:23