Revealed: The bizarre family tree at the heart of an extraordinary court battle over one little girl - involving two lesbian mothers, a gay sperm donor and a transsexual lover now living with a man

But judge rules said that another effective parent would risk harm


A transexual man went to court yesterday for the right to contact the child of his former lesbian partner. He brought the civil case despite having no biological connection with the nine-year-old girl.

Identified only as Alice, she was born to two lesbians who used donor sperm from a man also in a same-sex relationship. Family tree: The transsexual partner of a former lesbian lover of a nine-year-old's natural mother has been refused access to see the girl after a judge found that her life was complicated enough 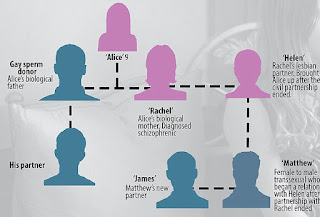 'Complicated': The transsexual partner of a former lesbian lover of a nine-year-old's natural mother has been refused access to see the girl after a judge found that her life was complicated enough.

The couple – known as Rachel and Helen – split up when she was three. Rachel, who was Alice’s natural mother, was sectioned with schizophrenia and Helen entered a relationship with Matthew, the man who has brought the case. When he met Helen he was a woman having treatment to live as a man.

They were together for four years – Alice living with them – and he claims she called him ‘daddy’ and he became her effective stepfather. They split up in 2013 and Matthew has had no contact with Alice, who has been diagnosed with autism, for almost a year. Having completed his gender reassignment, Matthew asked the Family Court to allow him to apply for an order for contact with Alice.

Judge Bellamy was asked to rule on the case of the 'complicated family' with two gay parents, a lesbian step-mother and transsexual 'stepfather'. His request was opposed by both Helen and Rachel, who said Alice had started to call herself Daniel and claim she was a boy while living with Matthew. 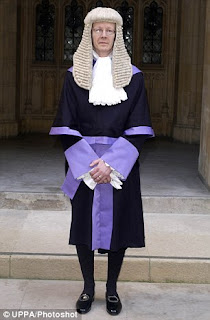 Helen was said to be very concerned that he encouraged Alice to wear boys’ clothes and told her to avoid playing with ‘gender appropriate toys’. She told the court in London that Matthew had been ‘controlling and verbally and mentally abusive’ during their relationship, and that his testosterone treatment had made him aggressive. Helen, who suffers from a personality disorder and has limited mobility, said she did not want Alice to stay overnight at the home of Matthew and his new partner, James.

Rachel, who had been Helen’s civil partner, said Alice already had contact with both her mothers and her biological father, the gay sperm donor. In a statement to the court, Rachel, who is now living in the community in supported accommodation, said: ‘It is time to put the dangerous drama of the past behind her once and for all. She must be allowed to simply settle down. She has all that she needs.’
Matthew, who also has psychiatric problems, said Alice knew he used to be a woman but had only known him as a man.

His sex change had been explained to her ‘in an age-appropriate way’, the court was told. Matthew denied that he had encouraged her to call herself Daniel or say she was a boy. He said he had played a central role in helping to raise her. Deputy High Court Judge Clifford Bellamy said Matthew had applied to the court for permission to ask for an order for contact with Alice.

The judge said he accepted that Matthew may have become a ‘social and psychological parent’ to Alice but said his contact application could be ‘potentially damaging’ for an autistic child.
Such an order would require months of psychiatric assessments, social services reports and court hearings and would be stressful for the family, he said. The judge refused Matthew’s contact request, saying: ‘There is a risk of Matthew’s application disrupting Alice’s life to such an extent that she would be harmed by it.

‘Alice’s story is an example of the different ways in which modern family life is formed. Modern family life can be complicated.’ None of the family can be identified for legal reasons and the judge said he had changed the names of everyone involved to protect Alice’s anonymity.

The judge, sitting at the High Court in London, denied the transsexual 'stepfather' should not have contact