Who didn't want him dead?

“The millionaire Hasidic slumlord found burned and suffocated in a Nassau County dumpster, his body still smoldering from the waist down... had so many enemies that investigators say they almost don’t know where to start looking...

‘Any number of people wanted to kill this guy,’ one law-enforcement source said of Menachem ‘Max’ Stark, 39, describing the father of eight as embroiled in several ‘shady’ real-estate transactions and being up to his tuchus in debt. ‘He owed a lot of people money,’ said another source…

Stark left behind a trail of angry tenants from more than a dozen residential properties… along with an untold number of unpaid contractors and angry business associates, investigators said… ‘He was involved in shady business deals, was known to carry around a lot of money and had a sealed arrest for forcible touching’ in his past, one law-enforcement source told The Post. The alleged victim was a young teen girl, said the source, declining to give further details.

‘He’s a Hasidic Jew from Williamsburg, and we think he’s a scammer,’ another investigator said of Stark, who had defaulted on more than $30 million in real-estate loans in recent years and owed tens of thousands in penalties for building violations. ‘He f–ked over a few people,’ the source added.

Many on Stark’s enemies list took to social media Saturday, and not to mourn his passing. ‘His slanted shtreimel on his head gives his crookedness away,’ one commenter wrote on FailedMessiah.com, referring to the victim’s fur hat in a photo.
‘Sentence his kidnappers to live in one of his buildings,’ wrote another poster to the site…

On the day he was abducted, Stark had called one businessman, a Borough Park-based real-estate developer, a dozen times, said the source, and had just succeeded in convincing the man to deposit $500,000 in an account for him, the source said…
At the time of his death, Stark owed tens of thousands of dollars in penalties for 148 Department of Buildings violations on his 17 properties, public records show. ‘He owed me some money on a job I was doing for him, and he told me to go f–k myself,’ one Williamsburg contractor told The Post of his dealings with Stark, who was notorious for bouncing checks.

Numerous former Stark tenants described living with vermin, plus shabby interiors and sporadic heat and water problems. ‘I’ve had many conversations with him, and of course in many of those conversations I wanted to kill him,’ joked Greg Hanlon, who lived in a Stark-owned building in Clinton Hill.

A Stark building at 239 Banker St. in Greenpoint was so decrepit, the city issued a vacate order in 2009 — and numerous tenants were left to chase Stark down in futile efforts to retrieve the four-month deposits Stark had demanded of them, one tenant organizer said. The building went into foreclosure shortly after. ‘He pretty much ripped off the whole building,’ said the organizer, Ryan Kuonen. ‘They kept trying to serve him, and he kept hiding from them. When he’d hear ‘Are you Max Stark,’ he would take off running.’

Investigators are finding a pattern of shady dealings in which Stark would acquire properties and then ‘lose’ the properties by failing to pay his mortgage and improvement loans, sources said. The properties would then be snapped up at bargain basement prices by family members and associates, one law-enforcement source said."
Not what you'd call Mr Wonderful then. Not someone you'd want to lend your mother's last ten bob to. Max wasn't loathed by everyone, however. The Post continues:

"Rabbi David Niederman of the United Jewish Organizations of Williamsburg told reporters Sunday that Stark ‘was a warm person when you approached him and needed something from him.

‘He was the go to-person that many people went to when they needed something special,’ Niederman said. ‘He paid for a special doctor, special education, food, or rent to stop eviction.’

Brother-in-law Abraham Buxbaum also described Stark, a married father of eight, as ‘the most loving and giving father, brother-in-law, friend, business partner, person. He is loved by everyone,’ Buxbaum said. ‘No one ever had an issue with him. It was always enjoyable to be around him.

I, personally, was in his office with his secretaries,’ Buxbaum added. ‘We went through some of his files, his accounts, his deals. Nothing, absolutely, was alarming to me. Everything, to me, looked normal’.”

On the same day, The Business Insider told us this:

Rabbi Abe Freedman tweeted that new New York City Public Advocate Letitia James was among the other politicians present at the press conference. According to the New York Observer's Colin Campbell, she suggested advertisers boycott the Post.
At the press conference, Adams called on the Post to issue an apology to Stark in Monday's edition.
‘The New York Post's decision to hang Menachem Stark in effigy on its cover, hours after shiva has begun, is a betrayal of journalistic integrity,’ he said.

They don't like their own 'shady' operators criticised, do they?

Oh yes, from the lofty heights of some council chamber or other, the David Cs are ever ready to pounce upon those who dare wash the dirty linen of the Orthodox in public.
And, of course, there's always some tame goy 'borough president' or equally pliable 'advocate' shiksa ready, willing and able to back up the Greenfields with a stern official denunciation from elsewhere within the corridors of power.

If there's one thing the eternal Jew doesn't like it's the whole truth, ladies and gents. The truth, the whole truth and nothing but the truth just does not suit those who seem happy to 'f-ck... people' over as a matter of course.

Osama Bin Laden got better coverage? Well, David, he wasn't responsible for the rats, was he? Or the bad loans and the building violations. Maybe that has something to do with it. And then, they do say that Osama wasn't entirely responsible for 9/11 either.
Maybe one or two down at The Post are catching up.

Check out The Talmud if you want to know where the Menachem Stark-type mindset comes from.

On 7 January 2014, Debra Nussbaum Cohen informed us further in the Israeli daily, Haaretz:

“At his funeral on bitter-cold Saturday night, attended by some 1,000 people standing on the streets of Williamsburg, Brooklyn, Stark was lauded as a pillar of his community… People in Williamsburg have been unequivocal. 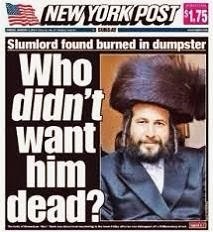 The Post headline was ‘pure anti-Semitism,’ said Sarah Teitelbaum, a Satmar housewife who asked that her real name not be used. ‘He was a big ba'al tzedaka (giver of charity). Everybody only has good to say about him.’ Leaders of the Hasidic sect as well as Brooklyn politicians condemned the headline…

Subsequent accounts have detailed some of the financial and legal troubles Stark faced. With a partner he owned dozens of rental buildings with roughly 1,000 apartments in trendy Brooklyn neighborhoods including Williamsburg and Greenpoint. He had not paid tens of thousands of dollars in fines levied by the city for rental properties in severe disrepair… The real estate trade paper The Real Deal reported in 2011 that he and a business partner had been sued for $51 million for defaulting on five separate loans.

On the consumer review website Yelp, one tenant wrote that he lived in a building owned by Stark for five years and ‘the plumbing was a nightmare. The first-floor was overrun with big-ass rats. Electricity would randomly be shut off for days at a time.’ Another poster wrote, ‘Think of every terrible stereotype and characterization you can possibly imagine when the phrase ‘New York City slumlords’ enters your head’…
Sources say that in fact there is no contradiction between the role Stark played in his Satmar community of Williamsburg, and how some tenants and legal documents say he behaved outside it.”

After informing us that Satmar boys are taught that ‘non-Jews aren’t quite human,’ Cohen then quoted Samuel Katz, brought up as a Satmar but now secular, thus:
“You don’t see commonality with people who aren’t Jewish. There is a completely different taxonomy of people. There are Jews and then there are non-Jews, WHO DON’T HAVE SOULS…

Every boy is taught that the bad goyim will be killed (when the Messiah comes) and the good gentiles will have the privilege of serving us, of being our slaves. The way Stark dealt with tenants is part of that world view… It’s not taking advantage of them, that is the world order you’re taught to expect.

It informs your moral compass. Like all good people Stark was benevolent and generous to the people who he saw were like himself, but not to other people. There’s an empathy ‘blind spot’ that imbues the Haredi outlook.”

Samuel Heilman, an ‘expert on Hasidic communities’ and a professor of sociology at Queens College, was quoted thus:

“What you do to the goyim is not the same as what you do to Jews… Part of the collective mind-set… was that you need to keep a distance from them, that THEY ARE A DIFFERENT LEVEL OF HUMAN BEING.”

Do you get it yet, folks?

These people, whom politicians and nobility throughout the western world have protected and promoted for centuries, have always seen we lesser mortals as  ‘a different level of human being,’ as having no souls.

That’s how Iraq wars come to be. (The US Neoconservatives, who were agitating for a second Gulf War from the time the first one ended, were almost wholly Jewish) That’s how the banking scandals and world-wide recessions come to be. That how Israel gets to do what it does to the Palestinians. That's how a wholly unrepresentative, damp-handed nerd like Ed Miliband gets to be the leader of the Labour party. When you can’t criticise or investigate a self-serving, other-despising community, that community can, whenever it wants, take advantage of the rest.

Check out the negative influence that the Jewish Board of British Deputies, via its role in the creation and implementation of race law in this country, has had upon the happiness and welfare of the British people.

Homosexual Jews have ‘higher souls’ than Gentiles and its related links should dispel any notion that the supremacism exhibited by the Satmar community is uncommon.
Posted by Michael Graham at 09:13