The Israeli authorities have demanded that a Palestinian family who were evicted from their house before it was demolished now pays for removing the wreckage.
by Kuzey News Agency


When Israeli bulldozers arrived in front of Ayman Said Kerrish's home, Israeli officers woke him up and instructed him to leave his home within five minutes. This stirred a wave of protests and anger in other parts of the world, but it has become a daily routine for Palestinians in eastern Jerusalem, which is the capital of the Palestinian State. 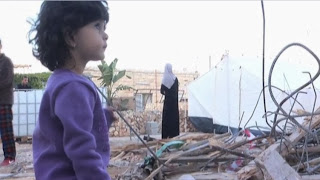 Kerrish and his family were left homeless and helpless in just five minutes and were not able to stop the cruel Israeli officers who were determined to tear down the house. The only things they possess now are the pajamas they were wearing as they fled their home.

“They came very early in the morning. There were 40-50 police officers and some troops from border units. Although we had not received any early warning about our house being demolished, they came here and start to destroy the house. We begged them to give us some time to take some valuable possessions,” he said, telling the incident to TRT TURK
. 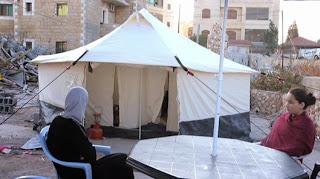 After several days of demolishing, Ayman’s little girl Nura still runs away from her father’s arms to the broken house that has a special meaning in her memory. There were 6 floors in the house where Ayman Kerrish lived, with his brother and other family members in four of them. But now this crowded Palestinian family must stay in a tent given by the Red Crescent in front of their destroyed house.

This tragic story is not unique for the Kerrish family. Israel will continue to illegally destroy Palestinian houses to make way for new Jewish settlements. Facing an economic bottleneck, the Palestinian authority is unable to provide sufficient aid to victims of Israeli brutality. The Kerrish family is working to get some legal consultancy from a Norwegian NGO.

The lawlessness embraced by the Israeli authorities with their indifferent stance towards international rules worsen the situation of Palestinian victims who do not know what the future holds for them. Noting that the Israeli goal is to put pressure on Palestinians to leave their lands, Kerrish said, “We do not know what will happen to us. They claimed our house without a license and destroyed it. But we did not rent this house, we bought it. How can they throw us out of a house without compensation?”

Instead of getting compensation for the injustice implemented by the Israeli officers, the Jewish authority demanded the family pays the cost of removing the wreckage. “What kind of justice is this? The laws are just on the paper. Their intention is clear to make Palestinians leave Jerusalem,” he cried out.