Tories ditched policies as fast as they listed them

'Cameron wanted to bury party Right,' say Lib Dems
By Simon Walters and Brendan Carlin - on 16th May 2010
David Cameron used the coalition talks with Nick Clegg as an excuse to ditch ‘daft’ Tory policies he secretly wanted to get rid of all along - such as scrapping inheritance tax and getting rid of his pledge to rip up the Human Rights Act, it was claimed last night.
The leader of Mr Clegg’s negotiating team, new Scottish Secretary Danny Alexander,said his Conservative counterparts, led by William Hague and George Osborne, produced a list of Mr Cameron’s manifesto pledges and invited the Lib Dems to strike them out.
And Mr Cameron’s controversial policy guru Steve Hilton was reportedly delighted that the coalition had enabled Mr Cameron to ‘bury the Tory Right-wing’. 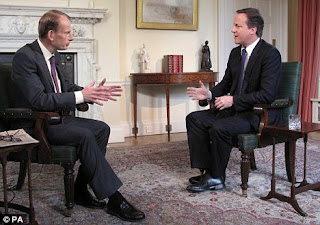 Under fire: David Cameron appearing on the BBC's Andrew Marr show today
The disclosure of just how easily – and willingly – the Conservatives surrendered key commitments to Mr Clegg threatens to spark a backlash against the shotgun wedding between the Tories and the Lib Dems.
A shocked Mr Alexander told Lib Dem MPs: ‘The Tories are ditching policies faster than they can list them. They pointed to them and said, “That can go, that can go.” We thought, “If they are offering up all this, is there anything they will not do?”’
Source Article:-
http://www.dailymail.co.uk/news/election/article-1278779/Tories-ditched-policies-fast-listed-Cameron-wanted-bury-party-Right-say-Lib-Dems.html#ixzz0oB2Mgtpv
Posted by HRP at 02:26