"You couldn't reproduce something like this, even with state-of-the-art machinery," expert Anton Dallmayer told the court in Munich, after comparing the card with three others believed to be genuine.

"In conclusion I would say that distinguishing features on the ID card in question match those on the other ID cards, and that therefore all in all it can be considered as authentic." 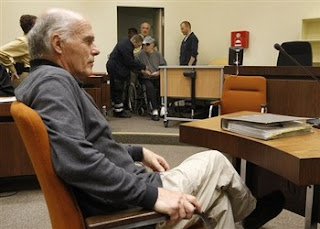 In what is set to be one of the last cases of its kind, Demjanjuk has been on trial since November, charged with helping murder 27,900 people at the Sobibor death camp in Nazi-occupied Poland in 1943.

With no witnesses able to say they could remember Demjanjuk, the ID card is the prosecution's only piece of concrete evidence it says links him to Sobibor. Demjanjuk denies the charges and says the document is a forgery.

However Anton Dallmayer, is the 'authorised expert' of the State Office of Criminal Investigation, so he can hardly be regarded as an independent witness. This ludicrously drawn out and grotesque farce of a 'trial' is reminiscent of the Salem witch trials. It makes a total mockery of claims of Western governments that we live in a society which enjoys 'free speech' and shows that holocaustianity is now the dominant and over aver-arching secular religion, to whom all most make obeisance and will tolerate no questioning on matters of faith. Five years prison sentence without parole for brave revisionists such as Ernst Zundel shows that the Zionists and their lackeys are terrified that the truth will soon be revealed.
Posted by HRP at 12:58