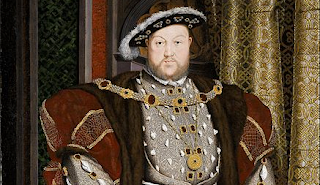 The slashed and broken medieval images displayed in the new Art Under Attack exhibition at the Tate are a reminder of what we lost in the hundred and fifty years after the Reformation. Even now there is denial about the scale of the erasing of our medieval past. The Tate estimates we lost 90% of our religious art. It was probably even more than that. The destruction was on a scale that far outstrips the modern efforts of Islamist extremists. And it was not only art we lost, but also books and music.

We think of Henry VIII and the destruction of the monasteries, but that was not the end of the destruction, it marked the beginning. The Archbishop of Canterbury, Thomas Cranmer, hailed the reign of his son, the boy king Edward VI, as that of a new Josiah, destroyer of idols. After his coronation an orgy of iconoclasm was launched. In churches rood screens, tombs with their prayers for the dead, and stain glass windows, were smashed. The Elizabethan antiquarian John Stow complained, some of this Christian Taliban “judged every image to be an idol”, so that not only religious art, but even the secular thirteenth century carvings of kings in Ludgate were broken.

Books too were burned on a vast scale. Earlier this year Melvyn Bragg was on TV telling us about William Tyndale during the reign of Henry VIII, and the forces of Catholic conservatism blocking publication of his English bible with its attached Lutheran commentaries. But conservatives were not alone in wishing to suppress books that contained ideas they did not agree with. When the monasteries were suppressed, their libraries were either pillaged or destroyed. How many works as great as the Lindisfarne gospels must have been lost? Out of six hundred books in the library of Worcester Priory only six remain. Three survived the destruction of the Augustinian Friars of York out of a total of six hundred and forty six volumes. And during the reign of Edward VI it was Tyndale’s ideological heirs and supporters who reduced almost every book in the Oxford university library to ashes.

Music in church was also disapproved of. Since it was largely then recorded in manuscripts, much of our early music vanished when libraries were burned. Organs were torn out of churches, and while in Elizabeth’s royal chapel you had the wonderful music of crypto Catholics like William Byrd and Thomas Tallis, there were few opportunities for other such composers to find employment or be heard.

The civil war, and the further destruction it brought, took place two generations after England had gone through what has been described as a “cultural revolution designed to obliterate England’s memory of who and what she had been”. There was not much of that past left. In our cultural history the Reformation is nearly always depicted as a force that opened up England from a closed minded past. But it was our knowledge of that past that was closed and if one future opened to us, we will never know what might have been, not least in art.

Lost Art in the years after the reformation

Ed - I have included this item as was not fully aware of the scale of the destruction. Nearly 900 religious houses were closed and destroyed between 1536 and 1541. I believe only part of reading Abbey survived and the parish church linked to Norfolk Abbey. The scale of the destruction of monasteries and works of art has been compared to the Chinese cultural revolution.