Welcome to Berlin's House of One – a church, synagogue and mosque

It has been dubbed the "Wonder of Berlin". And if a Protestant pastor, a rabbi and an imam can realise their shared dream, the world's first house of prayer for three religions will open its doors in the German capital in four years' time, with the building costs being paid for by donations. 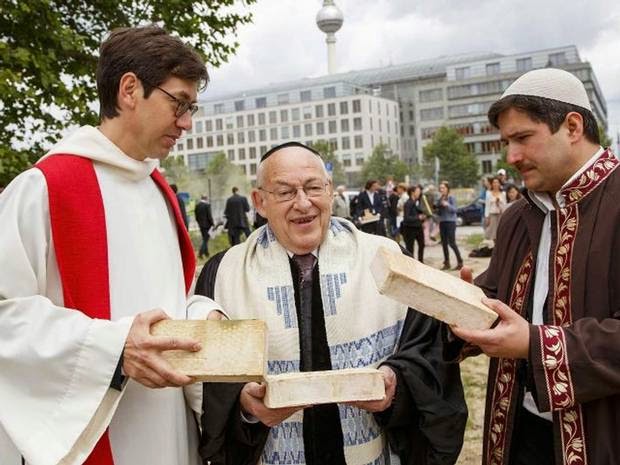 The unique project is called the "House of One", and its aim is to provide a place of worship and contemplation for adherents of the world's three main monotheistic faiths, although the building will also be open to all. It will house a church, a synagogue and a mosque under one roof.

"Berlin is the city of wounds and miracles," said Rabbi Tovia Ben-Chorin, one of the three behind the project. "It is the city in which the extermination of the Jews was planned. Now, the first house in the world for three religions is to be built here," he added.

The fundraising drive was launched this week, with a symbolic handing over of the first brick. The House of One's backers hope to raise the €43.5m (£35m) needed to construct the hexagonal-shaped brick building, on a site next to Berlin's central Museum Island, entirely through sponsorship. Anyone can donate money online. A single brick costs ¤10.

The idea was born in 2009, when archaeologists excavating a section of ground on Museum Island unearthed the remnants of Berlin's earliest church, the Petrikirche, and the city's Latin school, which dates back to 1350.

Architect Wilfried Kuehn with his model Architect Wilfried Kuehn with his model  "We quickly agreed that something visionary and forward looking should be built on what is the founding site of Berlin," said Gregor Hohberg, the Protestant pastor who initiated the project. He was convinced that multicultural, multi-faith Berlin was the right city in which to open a house of worship for three religions.

"Berlin is the city of the peaceful fall of the Berlin Wall and the peaceful coexistence of believers from different faiths – they yearn to understand each other," he said.

Imam Kadir Sanci, the House of One's Muslim leader, said he wanted the project to encourage a conscious dialogue between different faiths and cultures, which would help prejudices against Muslims to evaporate. "We want our children to have a future in which diversity is the norm," he insisted. 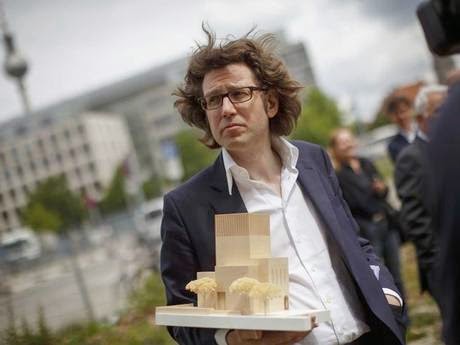 Kuehn's model Kuehn's model  The plans for the House of One indicate that while the building will contain a separate synagogue, church and mosque under one roof, there will also be a large central area, in which members of the three faiths and others can meet and contemplate. Last Tuesday, the House of One construction site on Berlin's Gertraudenstrasse was still a vacant building lot, with little more to show than a recently felled plane tree and dirty, grey sand scarred with the tyre tracks of lorries and excavators.

However, the desolate scene did not deter the pastor, the rabbi and the imam from symbolically burying their shoes in the sand at the centre of the site.

"One has to have a great deal of faith in God to imagine that a wonderful building, unique in the world, will stand on this site in just a few years," Mr Hohberg told a congregation from different faiths at a service a little later.

He added that building work could commence in 2016, providing donations to the fund of €10m had been raised by then.

[Ed. - this could be straight out of an 'End Times' film]

Source:-
http://www.independent.co.uk/news/world/europe/welcome-to-berlins-house-of-one--a-church-synagogue-and-mosque-9507002.html
Posted by HRP at 13:14