Marine Le Pen and Geert Wilders will have enough MEPs to form a publicly funded far-Right political group in the European Parliament following elections next month, according to a voting forecast. 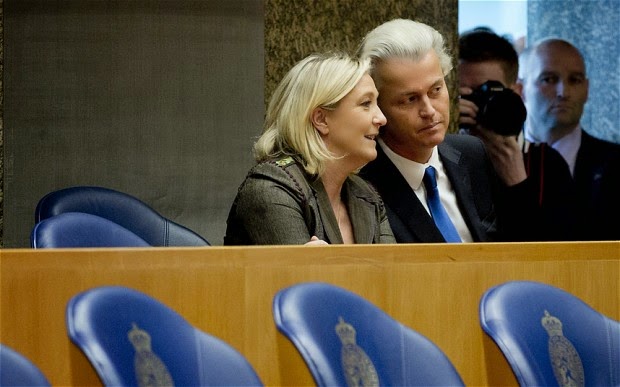 The Pollwatch2014 prediction, based on opinion polls across the European Union, puts the French Front National and Dutch Freedom Party leaders on course to form a far-Right parliamentary bloc of 38 MEPs from at least seven countries.

A bloc of such a size in the EU assembly would be entitled to over £2 million a year in public funding for European political parties and groups, with British taxpayers contributing around £300,000 to subsidise extreme nationalists across Europe.

The pair has formed a coalition called the European Freedom Alliance to campaign against the EU in European elections to be held in five weeks and both are leading the opinion polls in their native countries.

"I am convinced we'll have a group," Miss Le Pen said earlier this week
.
The Austrian Freedom Party, Belgian Vlaams Belang, Italian Lega Nord, Slovak National Party and Sweden Democrats have joined up with Miss Le Pen and Mr Wilders with opinion polling in those countries showing growing support amid a popular backlash against the euro.

The new grouping will pose a major political problem for Nigel Farage, the Ukip leader, who has refused an alliance with Miss Le Pen, because it threatens to break up his current Europe of Freedom and Democracy bloc, with the loss of around £1 million a year in funding.

The Front National leader is determined to take the crown as Europe's anti-EU leader from Mr Farage, who she has dismissed as being a political coward after he declined to campaign with her because of her party's past links to neo-Nazis and anti-Semitism.

To woo Mr Wilders, Miss Le Pen has severed all political links to the British National Party, Hungary's Jobbik and the Greek Golden Dawn while pushing her father Jean-Marie Le Pen, who has convictions for Holocaust denial, into the background.

Public funding for European political parties and groups is generous, amounting to £110 million in 2014 and the cash will provide a shot in the arm for the Dutch and French far-Right leaders who are intending to use the European Parliament as a spring board to win political power at home.

"The Front National used to be a party of opposition, it is now a party that is ready to rule," Miss Le Pen said on Monday.

http://www.telegraph.co.uk/news/worldnews/europe/eu/10770431/EU-elections-Marine-Le-Pen-and-Geert-Wilders-on-track-to-form-far-Right-bloc-of-38-MEPs.html
Posted by HRP at 13:36