Is War With North Korea Inevitable?

"If you see 10 troubles coming down the road, you can be sure that nine will run into the ditch before they reach you," said Calvin Coolidge, who ever counseled patience over the rash response. 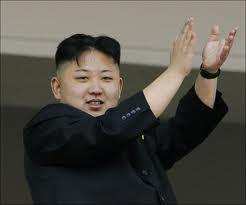 Unfortunately, the troubles presented by North Korea's Kim Jong Un seem unlikely to run into a ditch before they reach us.
For Kim has crawled out on a limb. He has threatened to attack U.S. forces in Korea and bases in Asia, even U.S. cities. He has declared the truce that ended the Korean War dead and that "a state of war" exists with the South. All ties to the South have been cut.
The United States has sent B-52s and stealth fighters to Korea and anti-missile warships to the Sea of Japan. Two B-2 bombers flew from Missouri to Korea and back in a provocative fly-by of the Hermit Kingdom. And both South Korea and we have warned that, should the North attack, swift retribution will follow.
Kim Jong Un is in a box. If he launches an attack, he risks escalation into war. But if his bluster about battling the United States turns out to be all bluff, he risks becoming an object of ridicule in Asia and at home.
Why is he playing with fire? Because his father and grandfather did, and got away with murder.
In 1968, Kim Il Sung hijacked the U.S. intelligence ship Pueblo and held its crew hostage. America, tied down in Vietnam, did nothing. In 1976, North Koreans ax-murdered two U.S. officers in the DMZ. In 1983, Pyongyang tried to assassinate South Korea's president in Burma and blew up three members of his cabinet. In 1987, North Koreans blew up a South Korean airliner.
These unpunished atrocities all occurred during the rule of Kim Il Sung.
Under Kim Jong Il, Pyongyang torpedoed a South Korean patrol boat, killing 47, and shelled a South Korean island, killing four. Neither Washington nor Seoul retaliated.
The danger is that Kim Jong Un believes he, too, can get away with murder and he, too, will be appeased with aid and investments.
Yet neither President Obama nor President Park Geun Hye — whose father, President Park Chung Hee, was the target of assassination attempts and whose mother died in one — can be seen as tolerating another North Korean outrage.
To avoid a collision, a diplomatic path will have to be opened for Kim to back away from the confrontation he has provoked.
But, in the longer term, America has to ask herself:
What are we doing, 20 years after the end of the Cold War, with 28,000 troops in Korea and thousands on the DMZ facing the North?
What are we doing there that South Korean soldiers could not do for themselves? Why is South Korea's defense our responsibility, 60 years after President Eisenhower ended the Korean War?
For over a decade, some of us have urged the United States to pull all U.S. troops off the peninsula.
Had we done so, we would not be in the middle of this crisis now.
South Korea is not inherently weaker than the North. It has twice the population, and its economy is 40 times as large. And the South has access to U.S. weapons superior to anything the North can acquire.

After Korea, Vietnam, Afghanistan and Iraq, as Robert Gates said, any defense secretary who recommends that America fight a new land war in Asia ought to have his head examined.
Why, then, are we still on the DMZ?
The long-run danger that has to be addressed is this: Kim Jong Un is about 30, and his life expectancy, absent a coup, is 40 or 50 years. Yet, within a few years, if he persists as he promises to do, he could have dozens of nuclear-armed missiles pointed at South Korea, Japan and Okinawa.
And if Pyongyang becomes a nuclear weapons state, it is difficult to see how Seoul and Tokyo will not be required to match its nuclear arsenal, as Pakistan felt compelled to match India's.
And a nuclear-armed South Korea or Japan would hardly be welcomed in Beijing.
What would China do? Some Chinese are urging Beijing to dump North Korea as an unreliable and uncontrollable ally that could drag them into war. Hard-liners are said to be urging China to stand by her longtime ally and buffer state.
Whatever comes of this crisis, U.S. policy, seemingly frozen in the 1950s, is in need of review. We cannot indefinitely be responsible for the defense of South Korea from an erratic dictator hell-bent on acquiring nuclear missiles.
In the near-term, even a conventional war on that most heavily armed border on earth, between South and North Korea, would be a calamity. To avert it, if necessary, Obama should pick up the phone, call North Korea and talk directly to Kim.
In a far graver crisis, perpetrated by Nikita Khrushchev in 1962, John F. Kennedy did not hesitate to communicate with the culprit.