A BBC probe unearthed cases of soldiers having to pay for their own physiotherapy and prosthetic limbs.


Mother of double amputee Ben Parkinson, who carried the Olympic torch in Doncaster, said injured soldiers are not always getting the help they need


Injured soldiers and their families last night criticised military charity Help for Heroes for spending millions on care facilities that they say should be funded by the Ministry of Defence.


They said that the charity’s funds should instead be targeted at the veterans themselves to help with practical care.


Help for Heroes is planning to spend £153million on building and servicing five regional MoD Personnel Recovery Centres to provide training and resources to injured servicemen and women. 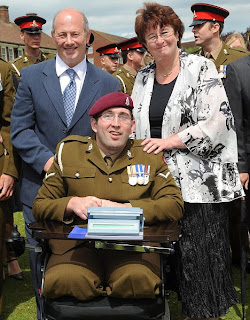 Mr McBean, 25, who lost an arm and a leg when he stepped on a Taliban landmine and is a Help for Heroes patron, said: ‘Rather than £100million being spent on limbs for every single guy who has been injured, and the future, instead the MoD somehow managed to get all these “Gucci” buildings out of it.’


Diane Dernie, the mother of Lance Bombardier Ben Parkinson – another double amputee – said: ‘We find it difficult to see these buildings, these edifices that are being paid for by charity.


The criticism was uncovered in an investigation by the BBC’s Newsnight and the Bureau of Investigative Journalism. Many contributors paid tribute to the charity’s ‘good intentions’ but said it was overly reliant on the MoD’s advice on where to spend its funds.


Last night the charity said it was ‘deeply upset’ by the ‘misleading nature’ of the report.
It said: ‘We work closely in partnership with the MoD but continue to drive the agenda and challenge the status quo.
‘We are fiercely independent and, far from getting our orders from the senior officers, we listen to the wounded themselves and then see how best we can support them.

‘We have committed over £121million-worth of support, the largest single contribution in British military history, both directly to individuals and to provide world-class facilities that would not otherwise have existed.’


Newsnight also found that some wounded veterans have complained that following their discharge from the forces they have been denied access to recovery centres, with one ex-Royal Marine corporal saying they felt like a ‘burden’ and had to beg to get what they needed, which they found ‘degrading’.